It's been nearly a month since the last update. I'm proud to say that I got a LOT done in that time and met most of the goals I had set for myself. Here are the highlights:

1. World 1 has been COMPLETED! I finished designing all the levels for World 1. I could keep polishing it but I've decided it's good enough and have moved on to other tasks. Currently World 1 has a total of 3 levels and 1 boss fight and adds up to (approximately) around 30 minutes to beat it. IMO it is a pretty solid amount of time for one world! 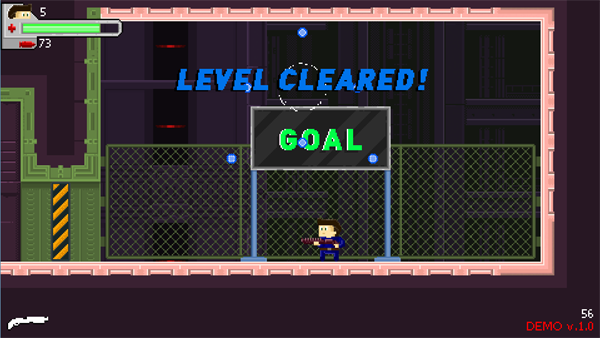 2. BOSS BATTLE! I made the very first boss for the game. This big yellow floating robot shows up at the end of World 1. He attacks by shooting projectiles from his arm cannons and can also inflict massive touch damage.  I quite like how it's animation turned out, although the actual sprites need more polishing in terms of shading and detail. I'm thinking it needs an jet pack like device to convey how he's actually flying, because right now he's just floating about in mid-air.

4. Deadly Drone! Another enemy I made is this drone that shoots at you at an angle. It's bullets destroy crates you might hide behind. And when defeated, it will dive towards you! I like this design so much that I plan on recycling it to create more variants. I'm thinking that other models will shoot heat-seeking missiles or even generate a flame. Maybe I will create a "good" version of this drone and have it follow the player. Ideas welcome!

- New tilesets and backgrounds (as seen in the gif above).

- Level designs for World 2. The basic rooms are done, but I'm still tinkering around with enemy and trap placements.

- Fine tuning of enemy behaviors. Some enemies were too difficult (or too easy). Those issues have been ironed out for the most part.

I will be releasing a new, more polished Demo soon and that will include most of the objects showcased in this thread so far. But if you haven't played Citadel Stormer 2 yet you can download the existing version (1.0) from my page!

It contains the full first level and takes around 10 minutes to beat. It also demonstrates the controls and the basic structure of the level design!

Thank you for reading!

Defeat the robot army of a malicious AI!